I received an email a couple days ago from a drummer in the UK.  He had emailed because he watched a video I made a few years ago about how to get over stage fright.  He wanted to buy my Zen of the Stage DVDs but was having trouble with the purchase process.

“I just watched a clip of you talking about stage fright on YouTube. I have been struggling for some time now and your YouTube clip really spoke to me.  I have tried counselling and hypnotherapy and although they were both helpful I still struggle. The clip I saw on YouTube was great, it made me feel empowered and positive so thank you for that. I’m going on stage in front of a large audience in a couple of hours and I’m going to write ‘GIVE YOUR ENERGY’ in black marker on my snare drum head!!”

That’s great, and made me feel good.  But it was the conversation and photos that followed over the next several days that made my whole week. The next day, he emailed me a photo from the gig he was nervous about: 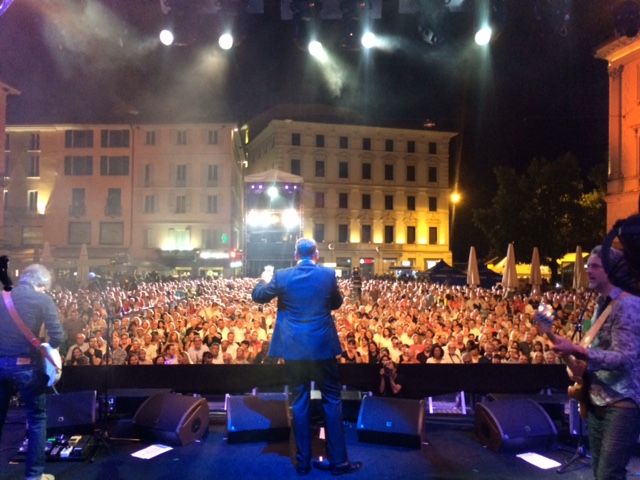 And he wrote, “The show went really well.  I totally used the ‘give your energy’ mantra. Everytime I looked down at my snare drum and saw it written it gave me a shot of positivity and made me smile. I also used gratitude and found that helpful. I can honestly say that is the first time in a long time I have actually gone on stage and enjoyed myself that much. Along with the pressure of the audience I had the added stress that the show was being broadcast on live TV, but all I could feel was positivity and joy. I had a couple of moments where i could feel the anxiety trying to creep in but every time I did I gave out some positive energy to the crowd and my fellow musicians and I then felt that positivity coming straight back at me!  I actually enjoyed myself on stage for the first time in ages.”
He added that he had an even bigger show coming up the next night, and he hoped that it would go as well.  I sensed a hint of him not being sure that it would actually go well, as if it weren’t under his control.  So I wrote back:
“It won’t be the same, but your mindset will still be under your control.  When I was a competitive waterskier, every tournament was different, and my mindset was a little bit different each time, but not a LOT different because it was still under my control.  Do the same thing as last night, and then go with the flow when it’s not exactly the same.  You got this!”
That seemed to resonate.  He replied, “I have just gone through the YouTube clip again and made some notes in preparation for tonight. For some reason the ‘Giving Your Energy’ point resonates so powerfully with me. When it got to that point and you said it, I smiled and felt a welling up of emotion just like last night whenever I looked down and saw it on my snare drum.  I will be mindful that although there will be many variables as there always are, I have found a technique that resonates with me and offers me a powerful way of dealing with my demons (it sounds so dramatic but the panic feels like a demon to me!) and whatever happens tonight that is a positive and I have moved forward a step, it’s such a good feeling :)”
Then, the next morning, he wrote, “WOOHOO!! Another great show last night, 6000 people! I had some nerves in the first 5 mins but no panic or anxiety. Again, I shared my energy and it made me happy. I have realised this weekend that maybe some of my issues come from the fact that i am not connecting with the audience or the musicians. I’m so busy trying to stop the panic taking over that I am closing myself off from the amazing feeling of performing. Using your techniques this weekend has really helped me to feel part of the whole experience of the gig, connecting and sharing the experience with the audience and being a part of an exchange of energy rather than being on mental lockdown (trying to stop the panic taking over) and experiencing nothing but fear. I really appreciated your message last night (UK time) before I went on, thank you.”

And a few hours later:  “Have just been watching some clips from the gig on Saturday night on youtube and I love watching myself having such a good time. Have another big festival in London next Saturday and I can’t wait for it! Have started my success log today as well.”

And he sent these photos:

I’m not posting this to try to sell the DVDs.  You can find them if you want to.  I’m posting it because Tim, from across the ocean, has made me smile ear-to-ear and made my heart grow big.  I don’t even know him, and yet I’m so happy for him and so proud of him!  Seeing this effect on just one person, far away, who I may never meet, makes me feel like I have purpose in the world.

And it cracks me up that he wrote all over his drum heads. 🙂

“Everybody Knows” – Advice from Bob Lefsetz For What It’s Worth